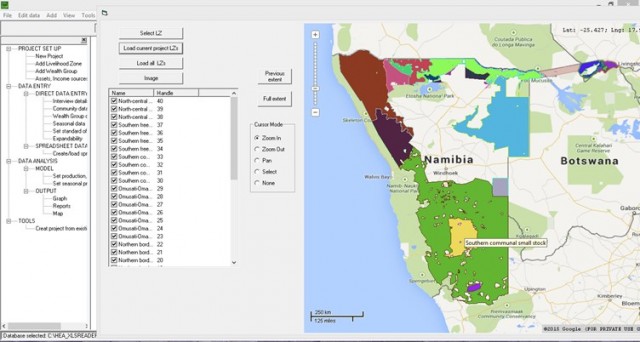 The household economy approach (HEA) is a method for assessing the vulnerability of rural populations to economic shocks and changes, based on their livelihood patterns and market information. It is now widely used as a method of famine early warning by many governments and humanitarian agencies, and also has important applications for managing the impacts of climate change on poverty and food security in developing countries. John Seaman, EfD’s co-founder and director of research, led the team in Save the Children UK which developed and piloted the HEA over 20 years ago – and he is now close to finishing new software that will greatly extend the method.

The need for new software

The household economy approach (HEA) is based on data describing the economies and wealth distributions of households in rural livelihood zones of developing countries, with current and projected data on types and quantities of production (including crops, wild foods and employment) and prices used to predict the impacts of drought and other changes on household incomes and welfare. These datasets are difficult to manage and analyse. At national scale, analysis requires the manipulation of data describing many livelihood zones, the development of multiple scenarios based on different assumptions – such as different price projections – and the production of output which is accessible to decision makers.

The original HEA design was based on the use of dedicated software, but for institutional reasons prototype software produced in the 1990s was never redeveloped in a usable package. The gap has been filled by spreadsheets, chiefly the ‘Livelihood Impact Analysis Spreadsheet’ (LIAS) developed by the Food Economy Group. However, spreadsheets have several limitations. They are a poor medium for data storage – data is now stored on hundreds of spreadsheets, leading to difficulties in data retrieval, while much contextual data is not retained at all – and spreadsheets allow limited scope for data manipulation and for quickly obtaining output in practical forms.

The HEA software developed by EfD is designed to: The software is now substantially complete. It is hoped that field testing can be completed and the software introduced to operational use within 2015.