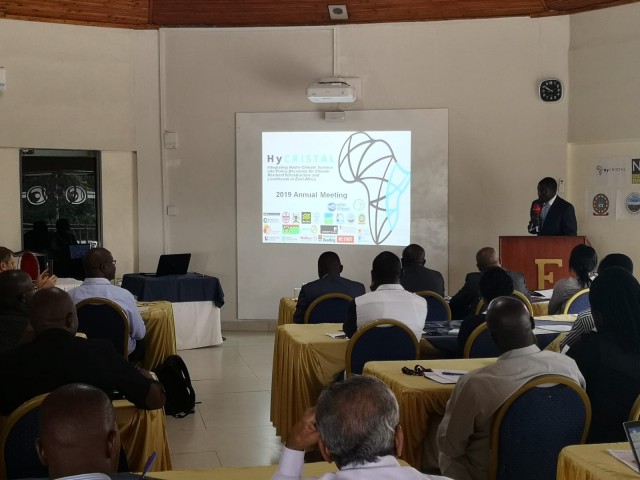 Keynote speech from the HyCRISTAL project meeting on 21 May 2019 in Kampala, Uganda

In Kampala, we are now in our first rainy season, but these are not the rains that we used to know particularly in my own district, Maracha-West Nile region.

Four years ago, the HyCRISTAL project  was launched in Kampala with the aim of developing scientific knowledge for the purposes of assessing vulnerabilities and increasing the resilience of communities in East Africa amidst a changing climate. This project came at the right time as rapidly changing climate conditions in various parts of Africa are proving to be a real challenge for climate science: the need for a vision to guide long-term climate adaptation through future climate scenarios is now a very urgent matter!

Tackling climate change, based on my experience, is no longer only about accurate future predictions, for example of rainfall and temperature conditions. It equally requires a clear focus on community and household resilience by analyzing productive assets, livelihoods and coping strategies, so as to appropriately inform legislation, policy and programmes.

A key step in this direction is understanding the context for future planning, which is normally defined through the concept of livelihood zoning and mapping at subnational, national or regional and possibly continental scale. A livelihood zone is an area within which people share broadly the same means of production and the same access to markets.

Four key parameters are considered when defining the context, including:

Geography: for example rainfall, temperature conditions, vegetation, topography, rivers, lakes, forests and minerals etc. These variables are analyzed when considering geography, because this determines what people can grow and where they can trade.

Production: what people do grow or what livestock they raise. This is critical in defining livelihood systems- for example pastoral, agro-pastoral, sedentary/crop farming etc

Markets: Where people trade their goods (including their labor) – all part of the human influence.

Consumption:  This is determined by production and markets and again is critical for understanding the way people live.

This livelihood zoning/mapping is required to set the context for future planning (sampling framework, predictions/projections, response), since it is location-specific and defined using climatic variables. Thereafter, we can explore the way people live in a particular livelihood zone. This involves understanding their livelihood strategies by focusing on asset types/ownership, levels of production, and income/expenditure along with other factors influencing access to productive assets, markets and employment. This stage of analysis also covers coping strategies a critical step towards measuring the actual impact of climate change on access to food and other resources among households in a particular livelihood zone.

Variation in rainfall amount/patterns alone is therefore not adequate in measuring impact of climate change. In addition to other variables, it requires a systematic investigation of household resilience, disaggregated by wealth group’s in order to quantify the impact of a particular economic shock due to climate change.

Household coping strategies vary, depending on the livelihood zone and the assets of a particular household. Examples of coping strategies identified during the HyCRISTAL and NIMFRU rural livelihood studies carried out by Evidence for Development and the Walker Institute, University of Reading include:

The Current Situation in Uganda

Uganda has now experienced about seven serious drought events over the last 20 years, where the national forest coverage has reduced to only 8%, with rapid degradation and loss of the wetlands particularly in areas around urban centers, an increase in average temperatures, and significant changes in rainfall patterns.

The first season of the 2019/20 consumption year experienced prolonged dry spells and this has affected crop germination in parts of eastern and northern Uganda/areas in the cattle corridor.

A recent (May 2019) situation report from the OPM/Ministry of Disaster Relief Food and Hunger, estimates 3.5 million people are facing emergency/crisis food insecurity due to prolonged dry spells and widespread destruction of infrastructure caused by storms. The Government of Uganda has allocated UGX 105 billion, approximately (30 Million USD) for emergency response.

Based on my technical opinion, this particular report lacks the element of measuring resilience-understanding the context/quantification of coping strategies. These figures would be significantly reduced if coping strategies were factored during the analysis, while measuring the impact of prolonged dry spells and storms on household access to food. In Karamoja alone 85% of the 1.2 million people have to be supported with emergency food assistance.

These findings fail to differentiate between climate-induced distress and chronically poor households who could be better supported through long-term social safety/protection interventions rather than emergency food assistance.  This is exacerbated by the lack of coherent national, regional and indeed continental response in the case of Africa and should worry all of us.

A deliberate shift in policy towards climate change mitigation WITH a focus on controlling environmental pollution, degradation and poverty alleviation among others will drastically reverse the current trends and impact of climate change particularly in Africa. The continuous threat to forest cover, vegetation, wetlands, rivers and lakes by various actors (including both investors and the rural poor) is a reality, we absolutely must be able to stop and reverse. We cannot allow runaway climate change. We need to protect the lives of all people and our planet.

It’s now more urgent than ever before that we need to fulfil our commitment towards addressing climate change through applied research to inform legislation, policies and programs aimed at achieving carbon neutrality before 2050, and keeping global warming to 1.5 degrees by the end of the century. This implies, we must now walk the talk! It’s indeed no longer business as usual, but a real call for CLIMATE ACTION, so as to save our planet.